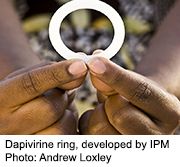 When used regularly, a medicated monthly vaginal ring may be an effective way for women in sub-Saharan Africa to protect themselves from HIV infection, according to new research.

The flexible ring contains the antiretroviral drug dapivirine. The ring, developed by the nonprofit International Partnership for Microbicides (IPM), is placed high inside the vagina where it steadily releases the medication over the course of the month. Women insert the ring and remove it on their own.

Researchers divided the women from Malawi, South Africa, Uganda and Zimbabwe into two groups. One group was assigned to use the dapivirine ring and the other group to use a placebo ring that contained no medication.

Between August 2012 and June 2015, 27 percent fewer women in the dapivirine ring group were infected with HIV than in the placebo group, the study’s authors found.

The researchers determined how consistently the women used the ring by testing levels of dapivirine in their blood every three months. They also tested how much drug remained on 12,000 rings the women used.

The researchers classified the women based on how regularly they used the ring, ranging from non-use to almost perfect use. They found that women who appeared to use the ring most regularly from month to month could cut their HIV risk by more than 50 percent and in some cases, by 75 percent or more.

“Adherence to HIV prevention strategies is not always perfect, and we knew that not all women used the ring consistently, so we developed an analysis to explore the degree of HIV protection that was associated with more consistent use. Across all analyses we saw high adherence was associated with significantly better HIV protection,” the study’s principal investigator, Elizabeth Brown, said in a news release from the Microbicide Trials Network (MTN). Brown is a research professor at the Fred Hutchinson Cancer Research Center and the University of Washington in Seattle.

The researchers said more studies are needed to confirm their findings, which were published online July 18 in the New England Journal of Medicine. The findings were also expected to be presented Tuesday at an international AIDS conference in Durban, South Africa.

A new study, known as the HOPE trial, will explore why the ring may work well for some women but not others. Women represent nearly 60 percent of adults with HIV in sub-Saharan Africa, the researchers reported. They noted that unprotected heterosexual sex is fueling the epidemic.

“The timing of these results could not be more perfect,” said Dr. Jared Baeten, protocol chairman of the ASPIRE study and leader of the HOPE study. Baeten is vice chairman of the Department of Global Health at the University of Washington.

“The goal of HOPE is to offer women a product shown to be safe and able to provide some protection against HIV. When we were conducting ASPIRE, we did not know whether the ring would be effective. Knowing the results of ASPIRE, it will be a totally new conversation with women in HOPE,” Baeten said.