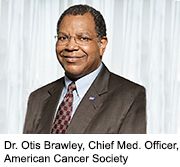 A headline-grabbing report earlier this week claimed that new cases of advanced prostate cancer in the United States had skyrocketed 72 percent in the past decade.

And the study authors from Northwestern University suggested the increase might be tied to a 2012 recommendation that men not be screened for prostate cancer by using the prostate-specific antigen (PSA) test. PSA, a protein produced by cells of the prostate gland, is often elevated in men with prostate cancer. However, the validity and usefulness of the PSA test has been debated for years.

But on Wednesday, the American Cancer Society challenged the validity of the Northwestern researchers’ findings.

“This study makes a dramatic claim about an issue all of us have been watching eagerly: namely, whether less PSA screening might lead to more advanced cancers. But the current analysis is far from adequate to answer that question sufficiently,” Brawley said in a news release.

According to Brawley, the usual way such studies are done is to look at the rate of cases. “But this study, done by a group of urologists, didn’t do that. Rather than measure rates of metastatic disease, they looked at the number of cases. That is far from the same thing,” he explained.

Brawley added that “you can’t simply look at raw numbers. A rising number of cases can be due simply to a growing and aging population among other factors.”

In addition, the increase in advanced prostate cancer cases began before the U.S. Preventive Services Task Force 2012 recommendation that men not be screened using the PSA test.

“There may or may not be a rise in the rates of metastatic disease; but because of a flawed analysis, this study does not answer that important question,” Brawley said.

The study in question was published July 19 in the journal Prostate Cancer and Prostatic Diseases. It said the biggest increase in prostate cancer diagnoses was among men aged 55 to 69, with a 92 percent jump seen over 10 years.

“The increase could be because the disease is becoming more aggressive, or it could be because there is less screening being done, but we don’t know why,” lead researcher Dr. Edward Schaeffer said earlier this week. He is chair of urology at Northwestern University’s Feinberg School of Medicine in Chicago.

It’s possible that prostate cancer may be getting more aggressive, Schaeffer said, but statistics also show that fewer men are being screened. That’s the probable consequence of the 2012 recommendation by the U.S. Preventive Services Task Force, the study authors suggested.

However, since advanced cancer cases began increasing before the 2012 change in the screening recommendation, the Northwestern researchers couldn’t definitively link the increase in cases to reduced screening alone, Schaeffer said.

Dr. Anthony D’Amico is chief of radiation oncology at Brigham and Women’s Hospital in Boston. He said it’s too early to tell whether less PSA screening has increased the rate of advanced prostate cancer.

The American Cancer Society recommends that men “make an informed decision with their health care provider about whether to be screened for prostate cancer. The decision should be made after getting information about the uncertainties, risks, and potential benefits of prostate cancer screening.” The discussion about screening should take place at:

After these discussions have taken place, men who still want to be screened should get the PSA blood test. The digital rectal exam may also be used as a part of the screening, the cancer society says.

For more on prostate cancer, visit the American Cancer Society.