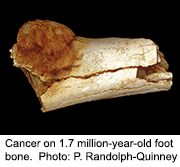 Researchers report that they have unearthed the earliest evidence of bone tumors and cancers, dating back almost 2 million years.

The discoveries challenge the belief that cancer is a disease of modern life, the study authors said.

“Modern medicine tends to assume that cancers and tumors in humans are diseases caused by modern lifestyles and environments. Our studies show the origins of these diseases occurred in our ancient relatives millions of years before modern industrial societies existed,” said researcher Edward Odes. He is a doctoral candidate at the University of the Witwatersrand (Wits) in Johannesburg, South Africa.

First, a 1.7-million-year-old foot bone with cancer was found at the Swartkrans cave in South Africa. The exact species is unknown, but it is a hominin, or bipedal human relative, the researchers said.

Until now, the oldest hominin tumor had been found in the 120,000-year-old rib of a Neanderthal, according to the researchers.

The cancer in the foot was an aggressive type called osteosarcoma, the researchers said.

“Due to its preservation, we don’t know whether the single cancerous foot bone belongs to an adult or child, nor whether the cancer caused the death of this individual, but we can tell this would have affected the individual’s ability to walk or run,” Bernhard Zipfel said in a university news release.

Zipfel, a Wits scientist who is an expert on the foot and locomotion of early humans, added, “In short, it would have been painful.”

Another member of the research team noted that the benign back tumor was a first in several ways.

“This, in fact, is the first evidence of such a disease in a young individual,” he explained. Randolph-Quinney was lead author of the benign tumor paper and co-author of the cancer paper.

Both reports were published July 28 in the South African Journal of Science.