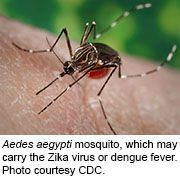 Brazil, by a wide margin, has been the country hit hardest by the ongoing Zika virus epidemic and its potential for birth defects.

But, public health officials are at a loss to say exactly why Brazil — host to the 2016 Summer Olympics that start Friday — became the epicenter of the epidemic, which began there in early 2015.

“We don’t fully understand why the epidemic broke out where it did. But we do know that a lot of the factors that have made Brazil the major zone are not shared by a lot of the world,” said Dr. Prabhjot Singh. He chairs the Department of Health System Design & Global Health at the Icahn School of Medicine at Mount Sinai in New York City.

“You are looking for a perfect storm for a place to become a hot spot,” he continued. “People want to hear that it’s just one thing that made Brazil the center point, but there are a bunch of things that could have contributed.”

Brazil has reported nearly 166,000 suspected or confirmed Zika infections so far this year, according to the World Health Organization. And 3,062 cases of the birth defect microcephaly — which causes babies to be born with small heads and malformed brains — remain under investigation, the Brazil Health Ministry reports.

People in these Western Hemisphere countries — and in the United States — are vulnerable to Zika because it hasn’t been present before on this side of the world, said Dabney Evans. She is an assistant professor of global health with Emory University’s Rollins School of Public Health in Atlanta.

“The Zika virus is endemic in other places in the world, but prior to this particular epidemic it had never existed in the Western Hemisphere,” Evans said, comparing the situation to the Spanish explorers who brought European diseases when they first touched the New World.

“Zika had never been in this part of the world before, so the entire population is vulnerable to it — the entire human population and mosquito population,” she said.

The Zika virus was first identified in Uganda in 1947.

People regularly travel to Brazil on business from Africa and Southeast Asia, where the virus has been present for some time. And this opened up numerous opportunities for infected individuals to introduce Zika to the native mosquito population in Brazil, said Dr. Robert Quigley, an infectious disease expert based in Philadelphia.

Many parts of Brazil also feature a very warm climate, crowded living conditions and poor sanitation — all conditions under which the Aedes mosquito thrives, Evans said.

“You can imagine the water and sanitation systems in the underdeveloped regions of Brazil might leave more room for mosquitoes to breed,” she said. “That may have been the kindling that lit the fire.”

Once faced with the Zika outbreak, Brazil didn’t have the medical or public health infrastructure that might have contained the situation, said Quigley, senior vice president of medical services for International SOS, the world’s leading medical and travel security risk services company.

“Their infrastructure is such that they don’t have a sophisticated Department of Health, as you would find in some of the more developed countries. They don’t have the bandwidth or the resources to go on huge vector control projects,” Quigley said.

The U.S. Centers for Disease Control and Prevention provides more on Zika virus.