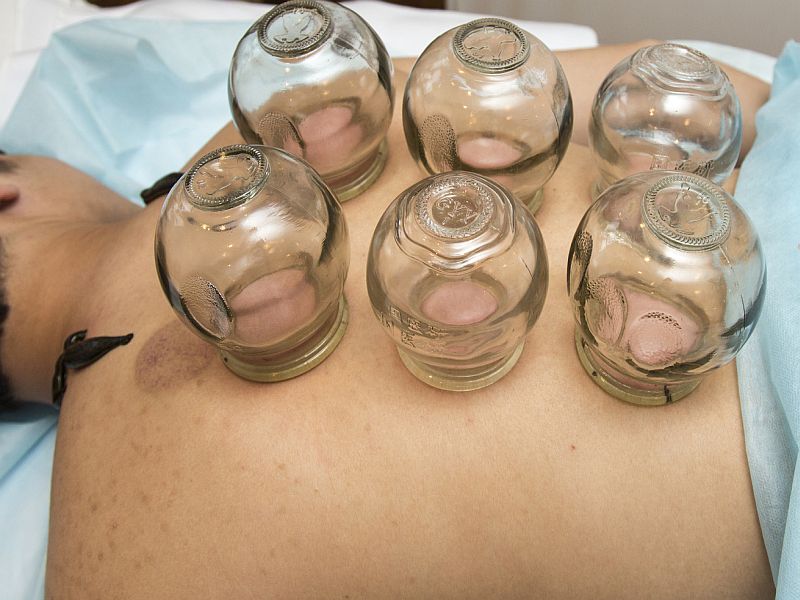 Eyebrows raised in Rio over the weekend when Olympic athletes like swimmer Michael Phelps started showing up with circular purple bruises on different parts of their bodies.

These bruises are caused by “cupping” — an ancient Chinese medical technique that may — or may not — stimulate muscles and increase blood flow, possibly relieving pain. The practice has become newly trendy among athletes and celebrities, experts said.

Cupping gets its name from special round cups that are placed on the skin over targeted muscle groups. These cups create suction against the skin, either by being heated or through use of an air pump.

The cosmetic result is apparent.

“When you put enough suction anywhere on the body, you get a bruise. You get that with a hickey,” said Dr. Brent Bauer, director of the Mayo Clinic Complementary and Integrative Medicine Program in Rochester, Minn. “You’re basically rupturing some of the tiny blood vessels.”

Interest in cupping has grown since cupping marks started showing up on celebrities within the past couple of years, said Dr. Houman Danesh, director of integrative pain management at Mount Sinai Hospital in New York City.

“People wear these revealing dresses, and you can see the cupping mark on their back,” Danesh said. Jennifer Aniston, Gwyneth Paltrow and Lena Dunham are among the celebrities who’ve sported the telltale round bruises.

Added Bauer: “It’s been around for a long time, and kind of comes and goes in waves of popularity, usually when someone famous mentions it. But this is the most interest I have ever seen generated about it.”

But does cupping actually help?

There’s an Eastern and a Western explanation for how this suction may help reduce pain, promote healing and improve flexibility, experts said.

Traditional Chinese medicine holds that cupping helps improve the flow of Chi, the life force that runs throughout the body, Danesh said.

“The idea is to put the cups around certain areas to release stagnant or blocked Chi,” Danesh said. “Imagine a river that is blocked. You do the cupping to remove the blockage.”

Eschewing such mysticism, Western practitioners believe that cupping can help the body by increasing blood flow to damaged or tight tissue, Danesh added.

“Anytime you injure a body part, you want to increase blood flow to stimulate the body’s natural responses, to clear out any toxins or repair any damage that’s been done,” Danesh said. “The increased blood flow also increases oxygen delivery to the areas involved. Oxygen is what’s used for food and nutrition for every single cell in your body.”

Cupping also can help improve flexibility by loosening up tight muscles, increasing an athlete’s range of motion in the same way a good massage might, Danesh added.

But not all medical experts are sold on cupping.

“There is no data to support the concept that local tissue injury can improve a systemic condition,” said Dr. Robert Glatter, an emergency physician with Lenox Hill Hospital in New York City. “Other than tagging you as having a bright visible scar, there is no scientific evidence to support this ancient practice.”

Bauer agreed that no large-scale studies or clinical trials have shown a consistent benefit from cupping.

“At the end of the day, we’re left with something that’s fairly dramatic looking but relatively harmless,” he said. “Some people do seem to get benefit in terms of pain control, but is there any true beneficial effect in terms of performance from an athletic standpoint? Those studies haven’t been done.”

Despite the lack of evidence, both Mayo and Mount Sinai offer cupping as part of their integrative medicine programs. Danesh and Bauer both say they have patients who swear by the practice.

“In the hands of a good practitioner who’s not just using it as a gimmick but part of an overall treatment program, I’ve had many patients use it successfully,” Bauer said. “They’ve seen the benefit.”

For more on cupping, visit the U.S. National Library of Medicine.