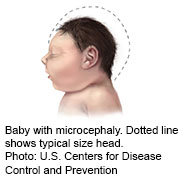 The death of a newborn in Texas is being blamed on a birth defect linked to fetal exposure to the Zika virus, state health officials say.

According to a statement released Tuesday by the Texas Department of State Health Services, the baby’s mother contracted Zika when she traveled to Latin America during her pregnancy.

The Zika virus is typically transmitted via mosquitoes, and is especially dangerous during pregnancy because it can cause the birth defect microcephaly — where babies are born with a small head and underdeveloped brain. Thousands of such cases have been reported in Latin America, especially Brazil.

The newborn was delivered in Harris County, had microcephaly, and died shortly after birth, state health officials said.

The officials stressed that “the mother and baby are classified as travel-related cases, and there is no additional associated risk in Texas.” Overall, Texas has documented 99 cases of Zika virus disease, including one other case of Zika-linked microcephaly, all related to travel abroad.

“Zika’s impact on unborn babies can be tragic, and our hearts are with this family,” Dr. John Hellerstedt, state health services commissioner, said in the statement. “Our central mission from the beginning has been to do everything we can to protect unborn babies from the devastating effects of Zika.”

In the meantime, Florida remains the only U.S. state with known cases of locally acquired Zika infection. As reported Friday, aerial spraying is killing many mosquitoes in a section of Miami where the insects have been linked to 16 cases of Zika infection.

Aerial spraying of the insecticide naled began Thursday and rapidly killed adult mosquitoes that ground-applied pesticides could not reach, according to Dr. Tom Frieden, the Associated Press reported. Frieden directs the U.S. Centers for Disease Control and Prevention.

The Zika infections in Miami are limited to a 500-square-foot area in the Wynwood neighborhood, according to Frieden.

There’s no evidence that mosquitoes are transmitting Zika in any other areas of Miami, the Florida Department of Health said.

Federal health officials have said repeatedly that they expect to see Zika infections in the United States this summer, particularly in hot, humid states like Florida, Louisiana and Texas.

U.S. officials said they don’t expect to see a Zika epidemic in the United States similar to what is occurring in Latin America. The reason: better insect control as well as window screens and air conditioning that should help curtail any outbreaks.

There is no vaccine yet or treatment for infection with Zika virus. Most people only experience mild symptoms.

The reports of insecticide success in Miami were the second bit of recent good news on the Zika front in the United States.

Last Wednesday, U.S. health officials announced that a potential vaccine for the Zika virus had entered early clinical trials to assess its safety in humans.

The DNA-based vaccine contains genetic pieces of the Zika virus. It is intended to trigger an immune response that would protect against the mosquito-borne virus, according to a statement from the U.S. National Institute of Allergy and Infectious Diseases (NIAID).

At least 80 healthy volunteers aged 18 to 35 will receive doses of the vaccine on differing schedules as part of a phase 1 clinical trial, the agency said.

NIAID Director Dr. Anthony Fauci said, “Although it will take some time before a vaccine against Zika is commercially available, the launch of this study is an important step forward.”

The CDC is urging pregnant women and their partners to stay away from Miami’s Wynwood neighborhood — the first time the CDC has ever warned against travel to an American neighborhood for fear of an infectious disease.

Mosquito-control efforts in Wynwood have been difficult because it’s a mixed-use area, where industrial sites are located next to a blend of residences and businesses, Frieden explained.

So far, the nearly 1,700 Zika infections reported in the United States have mostly been linked to travel to countries with Zika outbreaks in Latin America or the Caribbean.