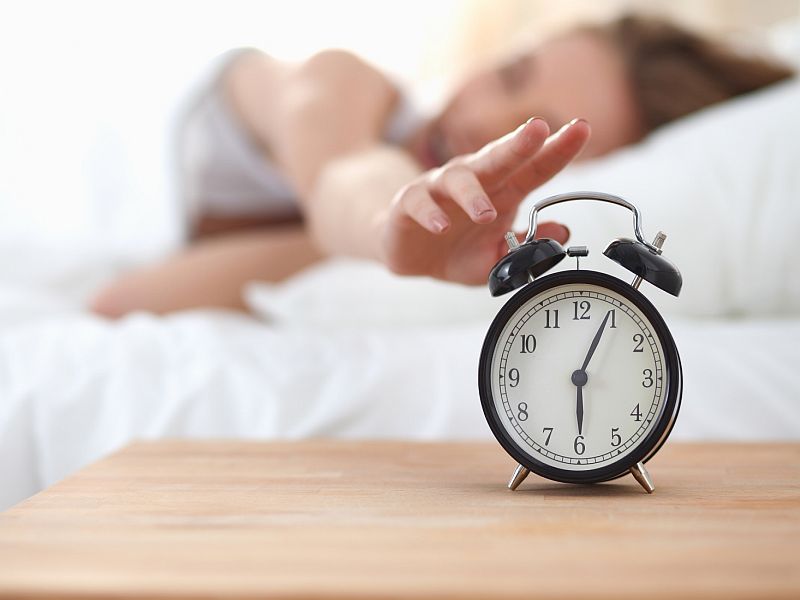 Both an internal “clock” and an internal “hourglass” affect how different parts of your brain respond to sleep deprivation, a new study shows.

The Belgian researchers said these findings could eventually aid in the understanding of sleep disorders, and help folks who work night shifts or those with jet lag.

The study involved 33 healthy young people who volunteered to stay awake for 42 hours and have their mental sharpness tracked along the way. Sleep scientists from the University of Liege used MRI scans to chart the volunteers’ brain activity as they performed tests of attention and reaction time.

Not surprisingly, their performances dulled as their sleep deprivation worsened.

But the brain scans revealed a complicated interaction between two basic biological processes: the body’s central “circadian rhythm,” which pushes people to be awake and active during daylight, and wind down when it gets dark; and “homeostatic sleep drive,” which pressures people to go to bed when they’ve been awake too long.

The findings were published Aug. 12 in the journal Science.

The circadian rhythm is like a clock, while the sleep drive is like an hourglass, explained Dr. Charles Czeisler, a professor of sleep medicine at Harvard Medical School in Boston. He wrote an editorial that accompanied the study.

The sleep drive is an hourglass, he said, because the pressure to knock off gradually builds the longer you’re awake.

The circadian clock, on the other hand, determines the timing of your sleep and wake cycles by responding to light and darkness.

That’s why, if you stayed up from 7 a.m. until 7 a.m. the next morning, you won’t sleep the day away to make up for it, Czeisler explained. You’ll drop off, but only for a few hours, he said, because your “internal alarm clock” will go off.

“The primary determinant of how long you sleep is not the amount of time you’ve been awake,” Czeisler said. “It’s what ‘time’ it is in your body.”

Sleep scientists have long recognized the two processes of sleep drive and the circadian clock, said Christopher Davis, of the Sleep and Performance Research Center at Washington State University-Spokane.

But the new findings reveal how the two forces affect different areas of the brain during sleep deprivation. “This dissects which brain area serves which master,” said Davis, who wasn’t involved in the study.

Those details, he noted, are important for scientists trying to understand how sleep supports brain function, and how sleep loss hinders it.

But for your average person, the message is pretty simple. “Get more sleep,” Davis said. “It’s important. The brain functions differently without it.”

Most people, of course, aren’t staying up for 42 hours straight. But it’s well known, Davis said, that real-world levels of sleep loss decrease work performance and raise the risk of accidents.

Then there are the “insidious” effects of insufficient sleep, he pointed out: People who habitually get too little sleep have higher risks of chronic ills such as type 2 diabetes and heart disease.

Getting more sleep can be easier said than done, Davis acknowledged. People with certain jobs — including shift workers, first responders and service members — may have to stay awake for prolonged periods or be active overnight.

And then there is insomnia. According to Czeisler, modern-day exposure to artificial light can be a factor.

In the latest study, he said, people’s brain activity showed a pattern that supports the idea that humans and many other animals evolved to suddenly become more alert just before dusk.

“Most species have this surge of energy, probably so we can get our act together and seek shelter before it’s dark,” Czeisler said.

But in industrialized societies flooded with artificial light, he said, that surge in wakefulness has shifted to later in the evening. And that, according to Czeisler, can help drive insomnia.

The National Sleep Foundation recommends that adults younger than 65 get 7 to 9 hours of sleep each night; older adults can get by with 7 to 8 hours.

But the “right” amount of sleep does vary to some degree from one person to another, according to Davis.

He recommended paying attention to the “signals” your body is sending out during the day.

“Observe your daytime sleepiness levels,” he said. “Do you get to the afternoon and want to just put your head down on the desk and go to sleep?”

The National Sleep Foundation has more on sleep drive and your body clock.