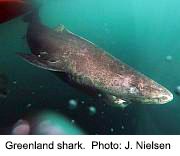 It’s entirely possible that a very old shark native to Arctic waters was alive and swimming soon after the Pilgrims landed at Plymouth Rock.

Using carbon dating techniques usually reserved for archaeology, researchers now estimate that a large Greenland shark was up to 392 years of age when it died — the longest lifespan of any vertebrate on Earth.

At the lower end of lifespan estimates, the shark might be 272 years of age — still a record, according to a team led by Julius Nielsen, a Ph.D. student in biology at the University of Copenhagen in Denmark.

Decades ago, it was discovered that Greenland sharks — one of the largest sharks in the world at an average of 16 feet — grow just a few centimeters over several years.

That led scientists to wonder how long they lived, but that question went unanswered because traditional ways of determining the age of fish can’t be used with Greenland sharks.

In a new study, marine biologists used carbon-14 dating of Greenland shark eye lenses to determine how long they live. This type of dating technology is typically used in archeology to gauge the age of artifacts from the distant past.

“As with other vertebrates, the lenses consist of a unique type of metabolically inactive tissue,” Neilsen explained in a university news release. “Because the center of the lens does not change from the time of a shark’s birth, it allows the tissue’s chemical composition to reveal a shark’s age,” he said.

“We use well-established radiocarbon methods, but combine them in a new way. This approach, along with the extraordinary ages for these sharks, makes this study highly unusual,” Nielsen explained.

Greenland sharks prowl the extremely cold waters of the Arctic. According to the GEERG Greenland Shark Research, the shark has rows of small teeth and is thought primarily to be a scavenger. However, “it is a predator capable of short bursts of speed, and under certain conditions may hunt seals and even larger mammals including the beluga whale,” the group said.

While the average Greenland shark measures about eight to 15 feet in length, some individuals can grow as long as 24 feet, GEERG said.

“Greenland sharks are among the largest carnivorous sharks on the planet, and their role as an apex predator in the Arctic ecosystem is totally overlooked. By the thousands, they accidentally end up as by-catch across the North Atlantic and I hope that our studies can help to bring a greater focus on the Greenland shark in the future,” Nielsen said.

The World Wildlife Fund has more on the Greenland shark.