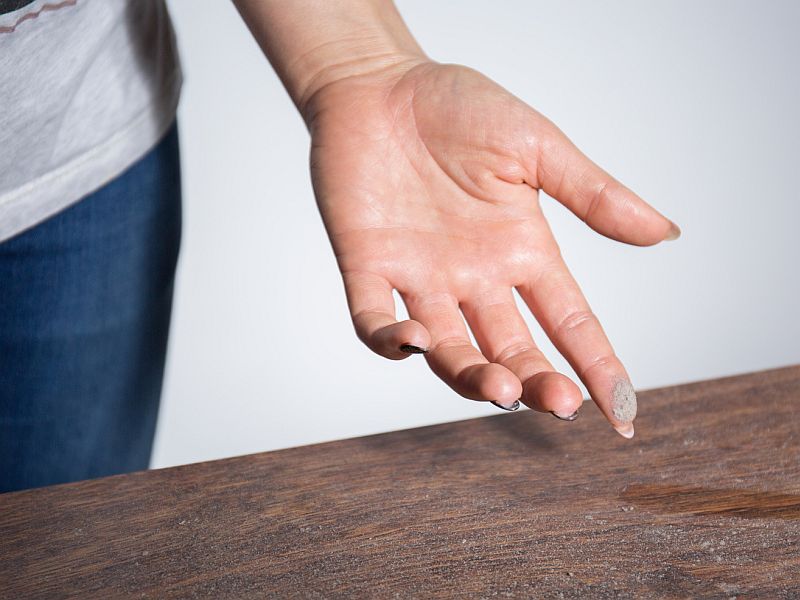 “Indoor dust is a reservoir for consumer-product chemicals,” Zota said. “Many of the times when these chemicals are added to consumer products, they’re not chemically bound to the products. They can migrate out of the product and into the air or dust,” she explained.

The 26 studies analyzed did not evaluate whether the chemicals are causing health problems. But Zota said this widespread exposure should raise concern.

“Some of these chemicals are associated with serious health outcomes,” she said, “particularly children’s health.”

The American Chemistry Council, which represents the chemicals industry, said the study “only tells part of the story.”

“The mere presence of a chemical does not signify risk to human health,” the council said in a statement. “Assessing health risks depends not only on understanding which substances are present in something like dust but also on the actual amount, route, duration and timing of exposure to those substances. Most of this important information is missing in this study.”

Dr. Kenneth Spaeth is chief of occupational and environmental medicine for Northwell Health in Great Neck, N.Y. He said the presence of these potentially harmful chemicals in homes has been known for some time and is worthy of some concern.

“Each of us tends to spend the vast majority of our lives indoors,” Spaeth said. “That includes sleeping and most of our daily life.”

Continual exposure to these dust-borne chemicals means that even substances that are quickly flushed from the body, like phthalates, continue to be replenished by our indoor environment, he said.

Other chemicals, such as flame retardants, tend to accumulate in the body, increasing the health risk, he said.

However, Spaeth added that further research needs to be conducted on whether dust-borne chemicals actually lead to health problems.

“To what extent these chemicals are in our bodies or affecting our health are open and important questions,” he said.

The study authors said they found 10 harmful chemicals in 90 percent or more of the dust samples analyzed, including a known cancer-causing agent called TDCIPP. Used as a flame retardant, it’s found in furniture, baby products and other household items.

Another chemical, a phthalate known as DEHP, “was detected in 100 percent of the samples,” Zota said. Phthalates are thought to interfere with hormones in the body. They’ve also been linked to a range of reproductive and developmental health issues, including IQ declines and respiratory problems in children, she said.

Four classes of dangerous chemicals appear in high concentrations in indoor dust, the researchers said. They include phthalates — the chemicals found in the highest amounts in the dust samples. Phthalates, which soften plastics and act as solvents, are used to make cosmetics, toys, vinyl flooring and other products.

Evaluating the potential of these chemicals to make their way into children, the researchers found that the flame retardant TCEP had the highest estimated intake. TCEP is added to couches, baby products, electronics and other products.

Dust samples also contained highly fluorinated chemicals such as PFOA and PFOS, which are found in cellphones, pizza boxes and many nonstick, waterproof and stain-resistant products. These chemicals have been linked to problems of the immune, digestive, developmental and endocrine systems, the study authors said.

Zota and Spaeth said you can reduce your exposure to household dust by:

“These kinds of simple measures can really make a difference,” Spaeth said.

The study findings were published Sept. 14 in Environmental Science & Technology.

For more on indoor environmental quality, visit the U.S. Centers for Disease Control and Prevention.