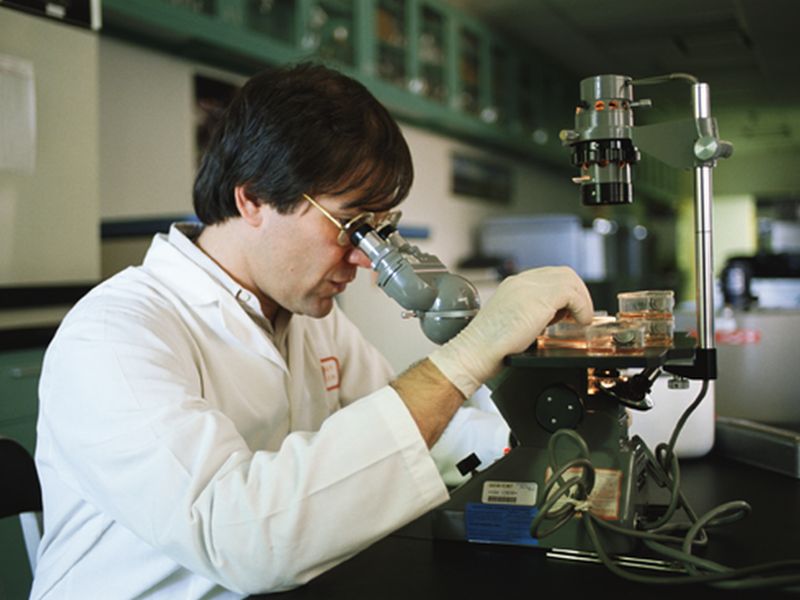 Scientists report they have successfully transplanted reprogrammed monkey stem cells into the eyes of other monkeys without the need for anti-rejection drugs.

The techniques used in this study have been in development for some time.

The long-term goal is to replace damaged tissues or organs one day with healthy new ones grown in a lab using stem cells.

Adult human cells can already be reprogrammed into stem cells and then grown into specific cell types. To avoid rejection, these cells have to be grown from someone’s own skin cells.

A research team at the RIKEN Center for Developmental Biology in Japan started a transplant trial involving patients with age-related macular degeneration and stem cells grown from their own skin cells.

The scientists grew retinal pigment cells from adult cells called induced pluripotent stem cells (iPSCs). The new cells were transplanted into patients with a damaged retina. Since the iPSCs were created from the patients’ own skin cells, rejection wasn’t an issue.

Although promising, this technique is expensive. It’s also time-consuming. The cells used must grow at the typical rate of development. As a result, patients would have to wait more than one year before they could receive their transplant.

“In order to make iPSC transplantation a practical reality, the current goal is to create banks of iPSC-derived tissues that can be transplanted into anyone as they are needed,” study author Dr. Sunao Sugita said in a RIKEN news release.

“However, immune responses and tissue rejection are big issues to overcome when transplanting tissue derived from other individuals,” Sugita said.

For the new study, the researchers tested another method to avoid rejection known as major histocompatibility complex (MHC) matching. MHCs are found in every cell. In people, MHCs are also known as human leukocyte antigens (HLAs). They are sets of proteins from cell surfaces that function in the immune system.

There are many genetic variations of MHCs. If someone undergoes a transplant and their donor MHCs are not recognized by their own T-cells, their immune system will trigger a response and reject the new tissue, the study authors said.

To assess the effectiveness of MHC matching, the researchers behind the new study took retinal pigment cells from a stem cell bank that were grown from monkey iPSCs and transplanted them into the eyes of other monkeys. Some monkeys were given genetically matched MHCs, while others received mismatched MHCs.

These results were published Sept. 15 in Stem Cell Reports.

In a second study in the same issue of the journal, the researchers repeated these experiments using human cells in the lab. The results were similar to the monkey trial.

Sugita added that the findings from their next clinical trial will let them know if the cell bank will be truly useful in humans or not.