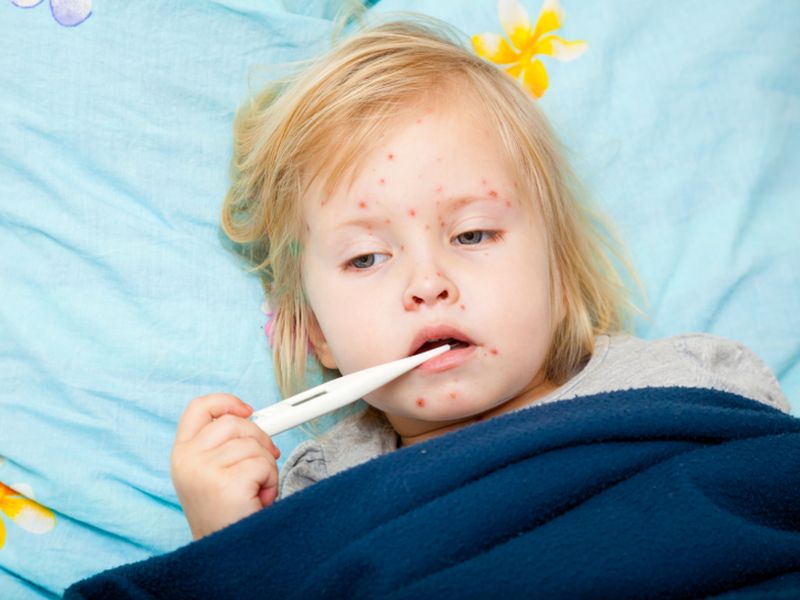 A deadly complication of measles infection may be more common than thought, researchers report.

While a case of the measles typically runs its course in two weeks, the virus can sometimes spread to the brain. Once there, it can lay dormant for years before reappearing as a progressive, debilitating brain disorder known as subacute sclerosing panencephalitis (SSPE), the researchers explained.

It was once thought that SSPE affects one in 100,000 people, but the new evidence suggests it strikes those who catch the measles at a young age particularly hard. One in about 1,400 children who get measles before the age of 5 may eventually develop SSPE, as will one in 600 babies who contract measles before they are 12 months old, the researchers suggested.

“SSPE is a late complication of measles. People get measles, they get better and then many years later — on average, 10 years later — it starts,” said study co-author Dr. James Cherry. He is a distinguished research professor of pediatrics and infectious diseases at the David Geffen School of Medicine at the University of California, Los Angeles.

In a recent measles outbreak at Disneyland in California, about 20 children who were too young to be vaccinated or who weren’t vaccinated got the measles, the researchers said, so these children are now at risk for SSPE.

“It’s a small risk, but it’s a definite risk,” Cherry said. “It’s important that all kids get vaccinated so it isn’t spread to younger children.”

There is no cure for SSPE and the only way to prevent it is to vaccinate everyone against measles, Cherry said. Some antiviral drugs, however, may slow the progression of the disease. Though people with SSPE often die one to two years after diagnosis, some may live slightly longer, he said.

Research presented at meetings is considered preliminary until published in a peer-reviewed journal.

For the study, Cherry and his colleagues identified 17 cases of SSPE in California between 1998 and 2016. All of these patients had not been vaccinated with the measles, mumps and rubella (MMR) vaccine. Although they all had measles as children, SSPE did not show up right away. The average age when SSPE was diagnosed was 12, but ages at diagnosis ranged from 3 to 35, the researchers found.

The researchers added that they do not know what causes the measles virus to reactivate in these cases.

But vaccinating a very high percentage of the population results in a herd immunity, so even those who can’t be vaccinated are protected because the disease is less likely to spread, Cherry explained.

Measles still circulates in Europe and Southeast Asia, so some cases will be imported to the United States every year. “That’s why we need to keep up this herd immunity,” Cherry said.

The MMR vaccine isn’t recommended until babies are 12 months old because they still have some of their mother’s antibodies until then, which makes the vaccine less effective and leaves them vulnerable to measles. Others who can’t get vaccinated are those with immune system disorders, the researchers said.

The first dose of MMR vaccine is given between 12 months and 15 months of age. Because there is a 5 percent vaccination failure rate, another dose is given before children start school.

Measles is so contagious that 95 percent of people need to be vaccinated with two doses to protect those who aren’t, Cherry said. All those who are eligible, including adults who have not been vaccinated, should get two doses of the vaccine.

Nearly 92 percent of U.S. children aged 19 months to 35 months have received the MMR vaccine, according to the U.S. Centers for Disease Control and Prevention.

Dr. Marc Siegel, a professor of medicine at NYU Langone Medical Center in New York City, added that “the measles virus is much more dangerous than the vaccine we use to protect against it.”

He said, “Given how highly contagious measles is, and given how common side effects are, this is a mandate to get vaccinated and stop fooling around with fears of things like autism from the vaccine.”

For more about measles, visit the U.S. Centers for Disease Control and Prevention.