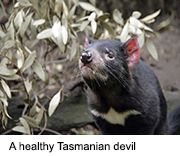 “This is almost a Eureka moment for us because it’s the first time we can say for sure that it was the immunotherapy that was making the tumor shrink,” said study leader Greg Woods, a professor of immunology at the University of Tasmania.

In 2015, the research team showed that the devils’ immune system could attack DFTD. The new study shows that the immune system is its best weapon against the disease, according to Woods.

“This is an important step along the way to developing a vaccine to protect against DFTD and potentially for immunotherapy to cure devils of established DFTD,” he said in a university news release.

The study was published online March 9 in the journal Scientific Reports.

Since its discovery 20 years ago, DFTD has killed about 80 percent of Tasmanian devils, which are found wild only on the island of Tasmania, Australia. They were placed on the endangered species list in 2008.

Tasmanian devils are the world’s largest carnivorous marsupials, reaching up to 30 inches in length and weighing up to 26 pounds.

The Tasmania Parks & Wildlife Service has more on the Tasmanian devil.