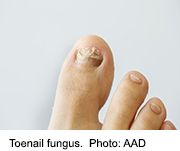 Fungal nail infections, though unsightly, are generally painless and can often be prevented, a skin and nail specialist says.

“Fungal nail infections are common and tend to run in families because of an inherited tendency, although not everyone is susceptible,” Dr. Joshua Zeichner said in an American Academy of Dermatology news release.

“Since fungal nail infections are contagious, it’s important to take precautions to reduce your risk of getting an infection,” Zeichner added. He’s an assistant professor of dermatology at the Icahn School of Medicine at Mount Sinai in New York City.

Signs that you’ve picked up a fungus include yellow or brown nails. The nail may also lift off the nail bed, or split or crumble.

So what can you do to keep this icky problem at bay?

The first step is keeping your toenails trimmed short. This helps prevent debris from building up under the nails and minimizes the risk of nail injuries. Cut nails straight across to keep them strong and avoid ingrown toenails, Zeichner advised.

In addition, always wear proper-fitting shoes. The tips of your shoes shouldn’t touch your toenails. It’s also a good idea to alternate your shoes each day so they can air out before you wear them again.

Breathable footwear is best, because fungus thrives in warm, moist areas, such as hot, sweaty shoes. Wear sandals whenever you can. If you have to wear socks, choose ones that wick moisture away from your skin, Zeichner said.

Put antifungal sprays or powders in your shoes and on your socks before wearing them in order to control sweat that can lead to fungal infections. Doing so is especially important in hot weather or before a workout, he noted.

Don’t go barefoot in public places, such as pools and locker rooms. Zeichner recommends wearing shower shoes or flip flops to protect against fungus on the floor that can cause athlete’s foot, ringworm and other skin conditions.

Never wear other people’s shoes or share nail clippers and files. If you go to a nail salon, check that staff sanitize tools and thoroughly disinfect footbaths before each use, or use your own footbath. If the salon does not appear clean, go to another one, Zeichner said.

The U.S. Centers for Disease Control and Prevention has more on fungal diseases.