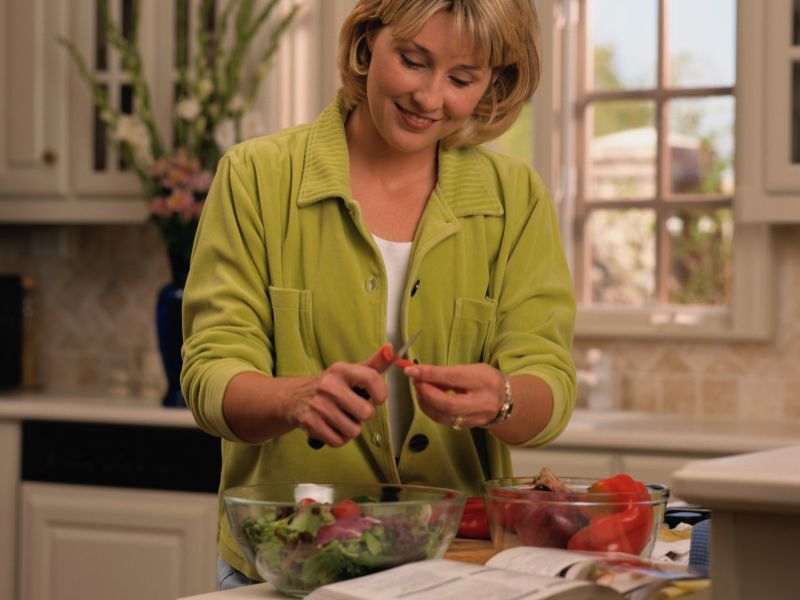 If you’re eager to save money while eating right, stick close to your own kitchen, researchers say.

The troublemakers for regular restaurant-goers are solid fats, calories, alcohol and added sugar, added Drewnowski, who directs the University of Washington’s Center for Public Health Nutrition.

The findings come from surveys of more than 400 Seattle-area residents.

The healthier-at-home results shouldn’t come as a surprise, said Lona Sandon, a Dallas nutritionist who wasn’t involved in the study.

“Preparing your food at home gives you control over what goes on your plate,” said Sandon, an assistant professor of clinical nutrition at the University of Texas Southwestern Medical Center at Dallas.

Americans spend half their food dollars on meals consumed outside the home, but only about one in five meets nutritional recommendations set forth by the U.S. Department of Agriculture. Moreover, by the 1990s Americans were getting about one-third of their daily calories outside the home, the researchers said.

With that in mind, between 2011 and 2013 they questioned 437 adults between the ages of 21 and 55 who were the principal food shoppers in their household.

They asked how often they had eaten in or eaten out in the prior week. “Outside” included restaurants, fast-food locales, food stands, grocery stores and vending machines.

In turn, the nutritional value of each participant’s diet was measured according to the U.S. Healthy Eating Index (HEI). This assesses whether someone gets the right combination of fruit, vegetables and other nutritional elements.

Roughly half the participants frequently cooked dinner at home — six times or more a week, the team found. One-third cooked dinner often (four to five times a week), while about 15 percent rarely did so (three or fewer times a week).

Those who ate more frequently at home scored higher on the healthy eating index than the others.

They also spent less overall — on food consumed outside and at home — than those who ate out more often.

Food bills for the group that cooked in the most averaged $273 a month per person versus $364 a month for those who ate out most often.

“The saving in not going out more than made up for the slight increase in at-home costs,” explained Drewnowski.

Fat, alcohol and added sugar “reduced the [healthy eating] scores for people who went out to eat often,” he noted. “But people eating at home also got more vegetables and fruit.”

Still, “cooking at home is not for everyone,” he acknowledged.

The point to remember is that eating out doesn’t have to be a no-no, he said.

Better choices can be made by those who “prize convenience” over home cooking, Drewnowski said. Many options are available, he noted. For example, “vegetables do not need to be steamed. They can be grilled, baked and sauteed, with some oil and salt. Or made into soups.”

If you decide to prepare your own meals, Sandon offers some advice: “Cooking at home does not have to be time-consuming or require advanced cooking skills to make a healthy, balanced meal that meets the dietary guidelines.”

Keep it simple, she said. Just try to ensure that every meal is composed half of fruits and vegetables, one-quarter of whole grains, and one-quarter of lean protein.

“Every meal does not have to be a master piece,” Sandon added. “Start simple with something like mac and cheese. Add a side of steamed broccoli and carrots with grilled chicken breast or salmon, and you have a balanced meal.”

The findings were recently published in the American Journal of Preventive Medicine.

For dietary recommendations, see the U.S. Department of Agriculture.