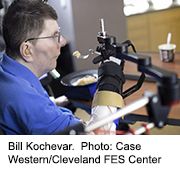 Grabbing a mug of coffee, having a sip.

It’s something most people would do without thinking, every day. But for Bill Kochevar, it’s a life-changing move.

That’s because Kochevar, 56, lost all movement below his shoulders eight years ago in a bicycling accident. But now he’s the first quadriplegic in the world to successfully use a dual-implant technology to regain some motion.

“For somebody who’s been injured eight years and couldn’t move, being able to move just that little bit is awesome to me,” said Kochevar, who lives in Cleveland. “It’s better than I thought it would be.”

The new system that is allowing him to perform simple tasks involves two technologies.

First, say researchers at Cleveland’s Case Western Reserve University, Kochevar underwent surgery to place two tiny sensors — each about the size of a baby aspirin — in the motor cortex area of his brain. That’s the brain region responsible for hand movement.

This step created a “brain-computer interface” that was able to interpret which movements his brain signals were seeking to initiate.

Translating those impulses into real arm movement was the next step. First, Kochevar underwent four months of training using the interface to move a “virtual” reality arm.

Next, he had 36 muscle-stimulating electrodes implanted into his upper and lower arm, including four designed for movements of the fingers and thumb, wrist, elbow and shoulder. The electrodes were turned on 17 days after the surgery and stimulated the muscles for eight hours a week over 18 weeks to boost the arm’s strength and movement and to reduce muscle fatigue, the researchers explained.

Finally, the brain-computer interface was connected with the electrodes in Kochevar’s arm so that his brain signals could be translated into movement.

The result? One year after the neuro-prosthesis was activated, Kochevar successfully drank coffee in 11 out of 12 attempts and placed forkfuls of food into his mouth on his own.

According to the research team, this is the first time scientists have restored brain-controlled reaching and grasping in a person with total paralysis. Rather than attempting to repair spinal injuries, this approach bypasses them, the researchers said.

“This is a major step toward restoring some independence,” he said in a university news release.

Will the system work for other paralyzed people? That remains to be seen. However, “the ultimate hope of any of these individuals is to restore this function,” added Benjamin Walter, a professor of neurology at Case Western.

“By restoring the communication of the will to move from the brain directly to the body, this work will hopefully begin to restore the hope of millions of paralyzed individuals that someday they will be able to move freely again,” he said in the news release.

At the time the new report was written, Kochevar had had the neuro-prosthesis system, dubbed BrainGate, for nearly two years (717 days) and had experienced only four minor complications that were remedied.

The findings were published March 28 in The Lancet.

Writing in an accompanying journal editorial, Steve Perlmutter, of the University of Washington, said “this study is groundbreaking as the first report of a person executing functional, multi-joint movements of a paralyzed limb with a motor neuro-prosthesis.”

“However, this treatment is not nearly ready for use outside the lab,” he cautioned. “The movements were rough and slow and required continuous visual feedback, as is the case for most available brain-machine interfaces, and had restricted range due to the use of a motorized device to assist shoulder movements.”

However, “it is an exciting demonstration nonetheless, and the future of motor neuro-prosthetics to overcome paralysis is brighter,” he said.

Already, the resarchers said, efforts are underway to make the technology wireless and to improve its brain-“decoding” abilities.

Kochevar knows more work must be done, and understands that he may need more surgeries to improve on the technology.

Right now, “this won’t replace caregivers,” he said. “But, in the long term, people will be able, in a limited way, to do more for themselves.”

The Christopher and Dana Reeve Foundation offers resources on paralysis.