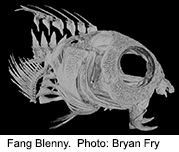 You wouldn’t want the fang blenny nearby while swimming, but its venom might actually help you someday, scientists say.

That’s because the heroin-like poison emitted by the blenny may lead to new and better painkillers.

“The fish injects other fish with opioid peptides that act like heroin or morphine, inhibiting pain rather than causing it,” explained Bryan Fry, an associate professor at the University of Queensland in Australia.

“The venom causes the bitten fish to become slower in movement and dizzy by acting on their [nerve cells’] opioid receptors,” he explained in a university news release.

The fang blenny is found on Australia’s Great Barrier Reef and other locations in the Pacific Ocean. The fish — sometimes called poison-fang blennies or sabre-tooth blennies — are also popular as ornamental tropical aquarium fish.

But it’s their distinctive venom that drew Fry’s attention.

“Fang blennies are the most interesting fish I’ve ever studied and have one of the most intriguing venoms of them all,” he said.

The venom contains an “opioid peptide” from the family of opiate drugs that includes Oxycontin, Vicodin and heroin. The blenny uses the venom to stun other fish, Fry said.

“To put that into human terms, opioid peptides would be the last thing an elite Olympic swimmer would use as performance-enhancing substances. They would be more likely to drown than win gold,” he said.

The opioids in blenny venom could lead to important new painkillers, Fry theorized.

He said it’s yet another reason why it’s crucial to protect the Earth’s fragile natural world.

“If we lose the Great Barrier Reef, we will lose animals like the fang blenny and its unique venom that could be the source of the next blockbuster pain-killing drug,” Fry said.

The study was published March 30 in the journal Current Biology.

The U.S. National Institute on Drug Abuse has more about heroin.