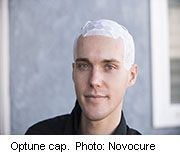 A cap that zaps tumors with electrical currents may boost survival in patients with a deadly brain cancer, new research suggests.

The device is worn on the head and exposes glioblastoma cells to a rapidly alternating sequence of low-intensity electrical frequencies. This interrupts cancer cells’ ability to function, the researchers said.

According to study author Dr. Roger Stupp, a professor of neurological surgery at Northwestern University’s Feinberg School of Medicine in Chicago, the cap is “an entirely different way to treat cancer.

“Our results demonstrate a proof-of-concept that this treatment modality actually works, and can prevent tumor cells from growing and dividing,” he added.

“And it does increase the survival rate at two years, three years, and even at five years, in a substantial amount,” said Stupp, who noted that the cap is “the first treatment to improve overall [results] in over a decade.”

The researchers pointed out that glioblastoma is the most deadly cancer affecting the adult central nervous system.

Stupp explained that the standard of care for this type of cancer involves surgery, followed by radiation and six to 12 months of chemotherapy with a drug called temozolomide. This regimen offers patients a roughly 27 percent chance for survival two years out.

This combined approach has been a vast improvement over prior treatment standards, which before 2004 had not included chemotherapy and only promised patients a 10 percent chance for survival two years later, he said.

But adding the cap, called Optune, to that regimen produced even better results, the researchers found.

The idea is to harness electrical fields that exert forces similar to “when you expose iron to a magnet,” Stupp explained.

The trick, he said, is to constantly change the direction of the electrical fields, so that exposed cells are constantly forced to reorient themselves.

“If you now do this at a specific frequency — in the context of glioblastoma cells, 200,000 times per second [200 kHz] — you will ultimately not allow the cellular structures to perform their function correctly,” Stupp explained.

So far, the concept has been tested among a pool of nearly 700 glioblastoma patients. Between 2009 and 2014, some patients were treated with standard care, while others were given standard care plus the cap device.

In the end, the study team found that survival time for the cap patients averaged 21 months. This compared with 16 months for those receiving standard care.

The cap also appeared to improve the chances for survival. For example, cap patients saw their survival rates at two, three, four and five years out hit 43 percent, 26 percent, 20 percent and 13 percent. This compared with rates among standard care patients of 31 percent, 16 percent, 8 percent and 5 percent.

When all of the data were pooled together, the research team concluded that cap patients had a 37 percent lower overall risk for death compared with patients who only received standard care.

The findings were presented Sunday at an American Association for Cancer Research (AACR) meeting, in Washington, D.C. Research presented at meetings is considered preliminary until published in a peer-reviewed journal.

“It will not work in all cancers,” he cautioned. But for many patients it could prove to be “a useful weapon,” he said.

AACR board member Dr. George Demetri, of the Dana-Farber Cancer Institute in Boston, called the survival benefit modest, because most glioblastoma patients still die within five years, according to the Associated Press.

And it is not cheap, with monthly treatments costing $21,000 a month, the wire service reported.

The device is made by Novocure, which funded the trial and is based in Jersey, England. It’s already sold in the United States, Germany, Switzerland and Japan for adults with glioblastoma, the AP reported.

To use the cap, patients have their heads shaved. Strips of electrodes in the cap are connected by wires to a small generator kept in a bag. Patients can wear a hat over the cap and they are supposed to use it for at least 18 hours a day, according to the wire service.

Visit the Dana-Farber Cancer Institute for more on glioblastomas.