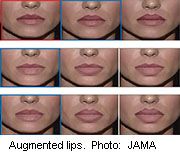 “In New York City, if you walk down the street, it’s almost like, ‘Whoa,’ half the people have this overinjected lip, and it’s quite obvious,” said Dr. Andrew Salzberg, chief of plastic surgery for the Mount Sinai Health System.

Now, researchers report that they’ve figured out the specific features that will help even surgically enhanced lips look normal.

Essentially, the upper and lower lips need to maintain the same basic size ratio that occurs naturally in humans, with a lower lip that’s about 1.6 times the height of the upper lip, explained lead researcher Dr. Sang Kim. He is a facial plastic surgeon with Natural Face Clinics in Syracuse, N.Y.

Upper lip injections also need to be performed carefully, to avoid wiping out hallmark features like the delicate Cupid’s bow along the upper crest of the lip, or the crisp angles at the corners of the lip, Kim said.

These conclusions were drawn from nearly 100 responses to a survey in which participants were shown a series of photographs of a female model’s lips.

The photos were digitally altered to show incremental changes in the size and shape of the lips, and participants were asked to identify the lips that looked most natural.

Dr. David Cangello is an attending plastic surgeon at Lenox Hill Hospital and Manhattan Eye, Ear and Throat Hospital, in New York City. He said, “What [the study] tells us is that, essentially, the normal lip architecture has to be maintained. If you alter that architecture, that is essentially what makes the lips look changed or artificial.”

These findings contain good news for victims of a bad lip enhancement. If doctors restore the lips to their correct ratio by plumping up the lower lip, chances are the face will regain its natural appearance.

There’s been a large and constant demand for lip augmentation in recent years, fueled by celebrities with “knockout” lips like Angelina Jolie, Lisa Rinna and Megan Fox, the researchers said.

“People are pushing the envelope further and further toward overtreatment,” Kim said. “I wanted to investigate, is there an objective measurement at which point a layperson will look at a face and go, ‘Wow, that’s artificial. That’s overdone.'”

Salzberg noted that too often people are injected only in their upper lip with a cosmetic filler, with nothing done to their lower lip.

“Your lower lip should pout out a little bit and be slightly larger than your upper lip,” he explained. “Once you disturb that, it becomes out of character.”

Cangello said the findings also show the importance of going to a good plastic surgeon who will maintain the delicate features of the upper lip.

“With the upper lip, not only do you have the Cupid’s bow, but you also have the sort of pouty mound in the middle of the body of the lip,” Cangello explained. “It sort of indents on both sides. If you get rid of that, fill the upper lip uniformly and make it look like a sausage, that also makes you look ‘done.'”

“We find the younger crowd has a greater tolerance for overtreated lips, and thinking it still looks attractive and not overtreated,” Kim said.

Complications are very uncommon in lip augmentation, Cangello said. When they do occur, it’s usually in the form of an allergic reaction to the cosmetic filler, infection at the injection site, or a bruise in the lip.

To avoid bruising, patients should avoid using medications such as ibuprofen or aspirin that could thin the blood for at least a few weeks prior to the procedure, he said.

The new study was published April 6 in the journal JAMA Facial Plastic Surgery.

For more on lip augmentation, visit the American Society for Aesthetic Plastic Surgery.