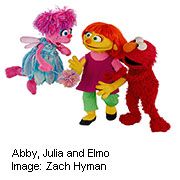 A half-century into its run as an iconic staple of children’s television, “Sesame Street” will introduce a character with autism to its world-famous neighborhood.

The new Muppet, a 4-year-old girl named Julia, makes her debut on the show on Monday in a special episode, “Meet Julia.” It’s slated to air simultaneously on both HBO and PBS.

“By introducing this character we want to focus more on the things that children share, rather than their differences. We do want to acknowledge the differences, but then through them find commonalities,” she said.

The “Sesame Street” team sees the addition of Julia as an opportunity to offer preschoolers an eye-opening window into the challenges faced by children with autism.

Julia, for example, can wield a paintbrush and sing alongside her Muppet peers. But she will also possess limited verbal skills, and will sometimes demonstrate the kind of repetitive hand-flapping that is often a visible sign of autism.

But “Sesame Street” will also strive to depict Julia — who has a mop of bright orange hair — as just another playful girl on the block: a sweet, curious and embraced addition to the beloved family of Big Bird, Elmo and Abby Cadabby.

Julia was first developed in 2015 as part of one of Sesame’s many youth-oriented community outreach initiatives, which variously tackle difficult subjects such as parental incarceration or death.

“And now,” she added, “we really see this as an opportunity to expand empathy and diversity by embedding Julia as part of our TV programming, particularly given the high number of people impacted by autism.”

The advocacy organization Autism Speaks cites U.S. Centers for Disease Control and Prevention numbers that show that 1 in every 68 American children has an autism spectrum disorder, a figure that breaks down to roughly 1 in every 42 boys and 1 in every 189 girls.

“So, this touches a lot of people,” said Lisa Goring, Autism Speaks’ New York City-based chief program and marketing officer. “And we applaud ‘Sesame Street’ for taking this step.”

How Julia Came to Be

Goring described the development of Julia as a “collaborative effort,” with Autism Speaks and 13 other autism organizations enlisted to provide feedback throughout the planning process.

“And we hope this will really demonstrate to children that people have different challenges and different strengths, but everyone is part of the community,” she said.

That sentiment is seconded by Rose Jochum, director of internal initiatives for the national office of the Autism Society of America.

“We’re thrilled,” she said. “This is a breakthrough. ‘Sesame’ is very big. They have always been about diversity, and they are just so beloved. So, this is very exciting.

“But still, I’ve heard many times people say that they wish there had been a Julia on TV when they were growing up, as a model for what they or their children were going through. Having role models is very important,” said Jochum. “And she will be a role model for other children.”

Julia’s Not Every Child With Autism

“It’s true, this is absolutely Julia’s autism,” Betancourt said. “We certainly do not claim that this is every child with autism. And we didn’t go to the extreme in terms of her limitations. Instead, we chose to focus on some of the characteristics and details that reflect some aspects of autism.”

For instance, Betancourt highlighted a first-episode interaction Big Bird will have with Julia (who is operated by puppeteer Stacey Gordon, herself the mother of a child with autism).

In that scene, Julia doesn’t respond when Big Bird says hello, leading Big Bird to think that Julia doesn’t like him, and that “she doesn’t want to be my friend.”

But eventually he learns to appreciate that Julia’s behavior is different from what he’s used to, and that her silence doesn’t necessarily mean a lack of interest.

“Our core audience is 2 to 5 years old,” said Betancourt. “Big Bird is only 6. And children that age are always asking ‘Why?’ ‘Why is he doing that? Why is he different?’ Which can be difficult for grownups to answer.

“So our main hope is just to talk about autism up front, and answer some of these questions from a child’s perspective. And to say to those who have autism: ‘You’re not alone,’ ” she said.

The “Meet Julia” episode will also be launched this week in the United Kingdom, Australia and Mexico, in English and Spanish versions. Plans are afoot to expand into other countries and language markets within the year.