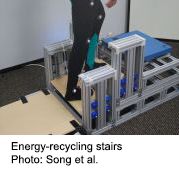 Does a long staircase leave you weak?

Take heart — researchers say they’ve developed stairs that “recycle” a person’s energy, which could be of help to seniors and disabled people.

The stairs use latched springs to store energy when someone goes down them. The energy is then released when a person climbs the stairs again.

According to the researchers from Georgia Institute of Technology and Emory University in Atlanta, the high-tech stairs absorb a person’s energy as he or she descends, which cuts forces on the ankle by 26 percent.

But when the person then ascends the same stairs, that energy is released, making the stairs spring up a bit. The ascent is therefore 37 percent easier on the knees than it otherwise would be.

“Unlike normal walking where each heel-strike dissipates energy that can be potentially restored, stair ascent is actually very energy efficient; most energy you put in goes into potential energy to lift you up,” said Karen Liu, an associate professor in Georgia Tech’s School of Interactive Computing.

“But then I realized that going downstairs is quite wasteful,” she said in a school news release. “You dissipate energy to stop yourself from falling, and I thought it would be great if we could store the energy wasted during descent and return it to the user during ascent.”

Liu said she got the idea for the new technology after watching her 72-year-old mother struggle to climb stairs.

To test the machine, Liu’s team analyzed patterns of energy use while nine volunteers went up and down the stairs.

Stairs can be difficult for many elderly and disabled people. Current alternatives such as elevators, stair lifts and escalators are expensive and use a lot of energy, the researchers noted.

Further study is needed, but energy-recycling stairs might become a more practical and affordable option, the study authors suggested. The study was published July 12 in the journal PLOS ONE.

“Current solutions for people who need help aren’t very affordable. Elevators and stair lifts are often impractical to install at home,” said Liu. “Low-cost, easily installed assistive stairs could be a way to allow people to retain their ability to use stairs and not move out of their homes.”