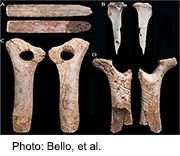 Engravings on an ancient human bone may have been part of a cannibalistic ritual, researchers report.

The bone — a right human radius dating from the Paleolithic period — was found in 1987 at Gough’s Cave in Somerest, Great Britain. Previous human bones found at the site had evidence of cannibalism, but there has been debate about whether some marks on the bones were made intentionally or were caused by butchering.

The bone in this study had cut marks, human tooth marks, impact damage and unusual zig-zagging cuts on one side, according to the researchers.

Their analysis of the bone led them to conclude that the zig-zag marks were engraved intentionally, suggesting they were made as part of a ritual.

The study was published Aug. 9 in the journal PLoS One.

“The sequence of modifications performed on this bone suggests that the engraving was a purposeful component of the cannibalistic practice, rich in symbolic connotations,” said Silvia Bello, a researcher at the Natural History Museum in London.

“Although in previous analyses we have been able to suggest that cannibalism at Gough’s Cave was practiced as a symbolic ritual, this study provides the strongest evidence for this yet,” she said in a journal news release.

The Natural History Museum in London has more on Gough’s Cave.