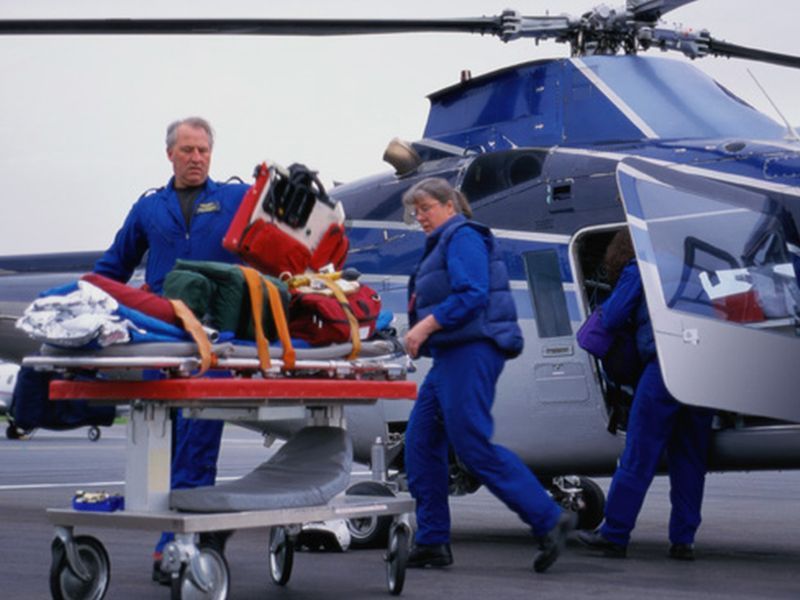 But a new study out of Denmark questions whether that expensive haste winds up saving more lives.

Researchers found no statistically significant difference in the death rate between people transported by ground ambulance or helicopter, according to findings published recently in JAMA Network Open.

That remained true even when researchers only looked at people with critical illness or injuries. They, too, died at statistically similar rates.

Examining deaths and illnesses for critically ill patients, the Danish researchers “found there’s not a lot of statistical difference in the overall mortality [deaths] between ground and air, according to this study,” said Dr. Michael Abernethy, chief flight physician with the University of Wisconsin School of Medicine and Public Health in Madison.

If these findings pan out, it would mean people are getting socked with huge bills for helicopter transport that didn’t necessarily increase their odds of survival.

Nearly 3 out of 4 air ambulance patients are at risk of being hit with a surprise bill of up to $20,000 per ride because the transport provider isn’t “in network” with their insurance, according to an earlier May 2020 study in the journal Health Affairs.

For the new study, researchers led by Dr. Karen Alstrup, from Prehospital Emergency Services in Aarhus, Denmark, reviewed 10,618 patients transported by either ground or air between 2014 and 2018, comparing outcomes in both groups.

Denmark is about 17,400 square miles, roughly the size of Vermont and Massachusetts combined, with a population of 5.8 million. The country is served by three medical helicopters.

In the study, 9,480 people were flown by helicopter and 1,138 transported by ground. That included 2,260 patients with critical illness or injury who were flown and 315 who were driven to a hospital.

About 23% of patients flown by helicopter died within one year of transport, compared with 24% of those driven in an ambulance, researchers found.

Among the critically ill, 25% died within one year of air transport versus 27% with ground transport.

These findings run counter to prior studies, which have found that transport by helicopter increases a person’s chances of survival, the Danish researchers noted.

But Abernethy — who wrote an editorial accompanying the study — argues that the Danish researchers did create a fair comparison of air and ground transport, because in that country both modes offer a similar level of medical care from trained personnel.

Further, the researchers used weather to randomize who received air transport, adding to the validity of their findings. Bad weather forced some to travel by ground, even when air transport would have been preferred, Abernethy noted.

It’s hard to say how these observations in Denmark might apply to the United States, which offers dramatically varying quality of air and ground ambulance transport depending on where you live, said Abernethy and Dr. Jonathan Berkowitz, medical director of Northwell Health’s Center for Emergency Services in New Hyde Park, N.Y.

“Health care systems vary enormously,” Berkowitz said. “I would have to do a deep dive, but I would not surprised if local considerations diminished the generalizability of this study to us. Their existing algorithms for selecting transport, types of providers on teams and pattern of illness could all impact this.”

Abernethy noted that helicopter and ground EMS units can vary considerably in terms of training — both with the aviators and the medical staff.

Some parts of the country also are oversaturated with air transport options, particularly where insurance reimbursement is more generous, he added.

“There are some areas of the country that are so oversaturated, they’ll have two or even three different flight programs sitting at the same airport, and night and day difference between their aviation capabilities and their medical capabilities,” Abernethy said.

Berkowitz said he’d like to see more comparison studies that look at outcomes other than death — for example, neurological status, length of stay in an intensive care unit, or how long it takes a person to be discharged from the hospital.

“There is more that we don’t know on these issues than what we do know,” Berkowitz said.

The Brookings Institute has more on air ambulance charges.