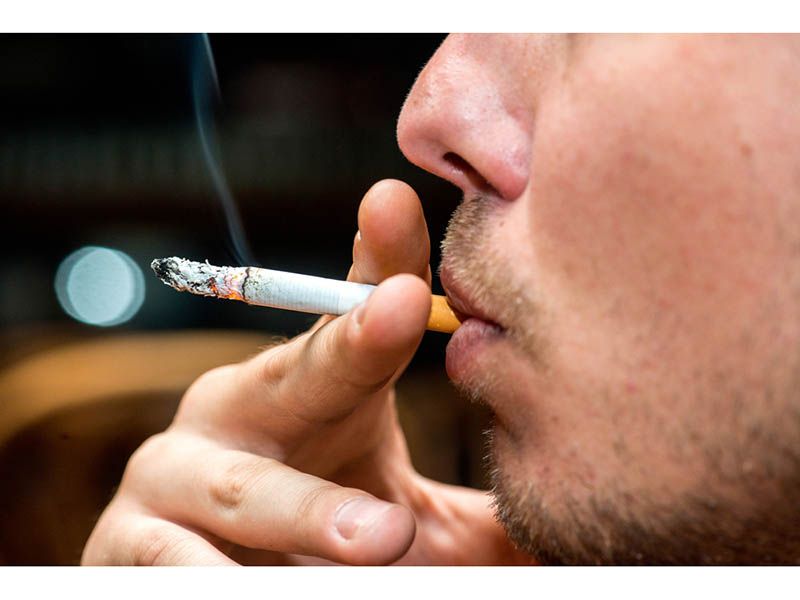 The U.S. Food and Drug Administration has proposed limiting the amount of nicotine in cigarettes to minimally addictive levels, but there’s been concern that the drop in nicotine could exacerbate anxieties in smokers who might already battle mood issues.

However, a new study shows that while cigarettes with nicotine at 5% of the normal dose can help anxious or depressed smokers quit, they do so without adding to mood or anxiety problems that led them to smoke in the first place.

“There do not appear to be any concerning, unintended consequences of having to switch to very low nicotine cigarettes,” said lead researcher Jonathan Foulds, a professor of public health sciences and psychiatry at Penn State University School of Medicine.

“On the contrary, it appears that the result is that smokers feel less addicted to their cigarettes and more able to quit smoking when offered relatively brief assistance with follow-up appointments plus nicotine replacement therapy,” he said.

Smokers with mood and anxiety disorders showed no signs of “over-smoking” the very low-nicotine cigarettes, nor was there any sign that switching to them made their mental health worse, Foulds said.

The U.S. Food and Drug Administration has proposed limiting the amount of nicotine in cigarettes to minimally addictive levels. Doing so could not only lessen addiction, but also reduce exposure to toxic substances and increase the odds of quitting, Foulds said.

In 2019, the FDA authorized two lower-nicotine cigarettes made by 22nd Century Group, Inc. — Moonlight and Moonlight Menthol. These brands are in market testing and not generally available, Foulds said.

“It would be appropriate for the protection of public health to move forward with implementing such a regulation as soon as possible,” he said. “It is now over 50 years since it became clear that cigarettes are lethal and addictive when used as intended. It is time to take action to minimize the addictive part of cigarettes.”

Dr. Panagis Galiatsatos, an assistant professor of medicine at Johns Hopkins University in Baltimore, and a volunteer medical spokesman for the American Lung Association, echoed that view.

“Lowering the amount of nicotine in cigarettes has been a public health tactic that we have strived for over the last two decades,” said Galiatsatos, who was part of the study. “Nicotine is the reason why people keep going back to cigarettes, knowing toxins are in there, knowing these carcinogens are in there, not because they want to create dire health situations for themselves.”

For the study, Foulds and his colleagues studied 188 smokers who had mood or anxiety disorders and didn’t want to quit. They were randomly assigned to smoke cigarettes with the usual amount of nicotine or those that had nicotine content reduced in stages over 18 weeks.

Over that time, researchers found no significant differences in mental health between the two groups. And those who were given reduced nicotine cigarettes were more likely to quit smoking than those whose smokes contained normal amounts of nicotine — 18% vs. 4%.

“It’s important to study people with mental health conditions, as they comprise about 25% of the population but smoke 40% of the cigarettes in the U.S.,” said Dr. Pamela Ling, director of the Center for Tobacco Control Research and Education at the University of California, San Francisco, who reviewed the findings.

She noted that people with mental health conditions die earlier than the general population, often of smoking-related disease.

“If this was a battle simply over broccoli, we would have won,” he said. “It’s not. It makes a lot of money for a lot of individuals. But from a clinician standpoint, we need to take these opportunities to implement appropriate clinical guidelines to make these patients nonsmokers.”

The study was published online Nov. 2 in the journal PLOS ONE.

For more on quitting smoking, visit the U.S. Centers for Disease Control and Prevention.