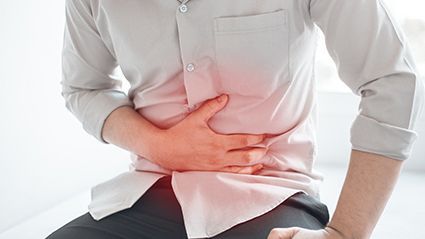 If you have frequent heartburn or think you may have acid reflux disease, see an expert before you suffer serious complications, one expert warns.

“Gastroesophageal reflux disease [GERD] is when you get acid and chemical damage to the lining of the esophagus,” said Dr. James East, a gastroenterologist at Mayo Clinic Healthcare in London.

While the stomach can resist acid, the esophagus is less able to do so, East noted.

Heartburn is a key symptom of reflux disease, but the disease is much more involved than that one outward sign.

Other symptoms can include feeling like you have a lump in the throat, having difficulty swallowing, having chest pain, coughing or having worsening asthma-type symptoms.

“Complications of reflux disease include esophagitis, inflammation in the bottom of the esophagus,” East said. “If this is persistent, you can develop scarring and a stricture,” or narrowing of the esophagus.

Over time, patients have to worry about Barrett’s esophagus, a condition that happens when the lining of the esophagus becomes damaged by acid reflux.

Then the valve between the esophagus and the stomach may begin to fail, leading to acid and chemical damage of the esophagus, according to Mayo Clinic Healthcare.

Risks include being a white man over the age of 50, having a family history of Barrett’s esophagus or esophageal cancer, and smoking. Other risks are having excess abdominal fat or reflux disease lasting more than five years.

“If you have three of those risk factors, then you should have a screening endoscopy for Barrett’s esophagus,” East said in a clinic news release.

Screening for Barrett’s esophagus includes using a lighted tube with a camera at the end, called an endoscope, and passing it down the throat to check for signs of change in esophagus tissue. A biopsy can be done to remove tissue and confirm the diagnosis.

Treatment depends on the extent of abnormal cell growth and overall health, according to the Mayo Clinic.

Lifestyle measures and medication can help reduce acid reflux and esophageal acid exposure. Treatments can include proton pump inhibitors. But a good place to start is to avoid coffee, alcohol and smoking, experts say.

“The stomach is well designed to handle highly acidic conditions. But the esophagus is not designed to cope with acid. And, so, when acid comes up, that acid reflux damages the cells, replacing them with more acid-resistant cells that develop into Barrett’s esophagus,” East explained.

“If you have severe or frequent reflux disease, you should seek medical advice,” East said.

The U.S. National Institute of Diabetes and Digestive and Kidney Diseases has more on Barrett’s esophagus.